Singing in The Garden of My Secret Tearoom

Well, it’s been some time since I caught up with “Sometimes She Dances”, aka Sarka, and since then there has been a development amongst the little community of cafes in my local neighbourhood.

A traditional, Victorian-style tearoom has opened – complete with cute tea garden too – all tucked away in the corner of my street. It even calls itself “My Secret Tea Room”

Tea rooms have an interesting history too, as this blog post on the tea room’s site testifies too , however they have become a bit of an endangered species in recent times as Elizabeth from Rosalilium mentions in a post on her lifestyle blog-site as the chains further encroach on the territory which was once bastion to the independent cafe or tea room.

Indeed, perhaps even echoing what is written on Rosalilium, a Costa cafe is due to open here shortly – and so it will be interesting to see whether this ends up being a cuckoo’s nest for cafes here, with the entrance of a chain to kill off the competition from the die-hard locals.  Certainly I saw it happen in Queen’s Park, just across the way, with all the chains entering – except the independents there diversified away from purely serving coffee, tea, sandwiches and cake to being delicatessens or pizza places and even a mix of cafe and clothes shop (!)

I don’t see that happening across the park in Kensal Rise however, as I feel the plethora of unique local cafes each have something unique to offer – from what they serve, to where and how they serve it – providing a unique vibe and personal space to enjoy.

As such, I think my friend, Nadia, from My Secret Tea Room has something to gain from what Elizabeth has said in her post – and simply serve great tea, the way it’s meant to be, along with a nice array of sandwiches and cakes. Can Costa compete?  We’ll see – but it certainly won’t be with their tea.

In any case, as a footnote – and explanation of the title of this blog post – I never managed to get around to catching up with Sarka, the subject of my previous post, at that cafe in Brick Lane a few weeks later.  However I did bump into her again at Queen’s Park Market – a few weeks later – where she was actually able to play inside, thanks to Gay (one of my favourite stall-holders from the market there) wrangling with the Market Officers to get her a corner to play in amongst the stalls, thereby creating a much more pleasant atmosphere. 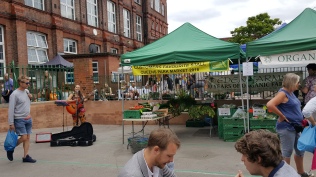 It was in seeing Sarka play there, amongst the fruit and vege stalls, that I suddenly had an idea – why not have her do a gig in the hidden garden at The Secret Tea Room?

So, a few discussions by text and an email or two after that, I arranged for her to meet up with Nadia in the garden of her tea room – and then left the two of them to chat and sort things out.  I am very pleased to say that they did, and so there is going to be some singing happening in My Secret Tea Room some time in the next few weeks.  I am also going to use it as a first occasion to test out producing a video I can put in a vlog to you of the gig.  Go try competing with that, Costa!

Also, The Secret Tea Room and Tea Garden are now only open for private parties – so this is an opportunity to see inside.

A New Age travel writer, seeing the old in the new and the bold in the blue - but mainly seeking the freedom to be, as much as to do. His tales come from meeting modern day travellers following their likes of King Arthur to Geoffrey Chaucer, leading him on to places considered "Camelot" and different ways to see Canterbury and cafes a lot. Email: mattstale@yahoo.co.uk Twitter: @mattstale
View all posts by Matt's Tale →
This entry was posted in Kensal Rise, London, Uncategorized and tagged cream teas, singing, tea room. Bookmark the permalink.