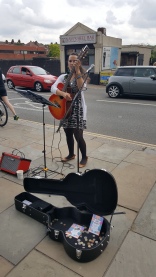 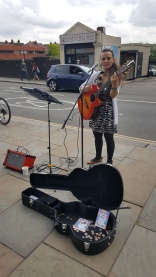 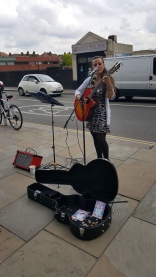 It was only last Sunday, at the Queen’s Park Farmer’s Market, I was reminded about one of the principles of this blog-site – about “way leading to way“, as taken from the Robert Frost poem – and how I thought it’d be possible to find one’s way from one good cafe to another through talking to people at one cafe and learning of their experiences of another one, as well as discovering something about their story too.

The girl in question had come for coffee at Chad’s stall.  I recognised her as the busker singing folk songs at the gate as I came into the market.  She had a distinctive look, largely contributed by the feather woven into her hair, and it reminded me of American Indians.  I remarked as much, as she stood in line for her coffee, and how it fitted with the type of music she was playing.

Indeed, before even getting her name, Chad chipped in with “Sometimes she dances” – and I laughed and said “that could be your American Indian name!”

It was at that point she said she had had an interest in travelling to South America to learn more about the Indians there in places like Bolivia and Peru – and I then told her about my own unique experiences with the local music there, while walking the Inca trail to Macchu Pichu, and how I had come to discover some of the secrets of the people there from the Andean Music Museum in Cusco.

She said she would be very interested to know more, as she and her boyfriend had lived in Brazil and were thinking of travelling there again in the near future.  It seemed to me to be an ideal thing to discuss over a coffee at a unique cafe somewhere, and so I told her about this site and interest in discovering interesting – and ideally unique – cafes through it, along with a good story.

As such, she told me about this great-sounding little cafe in Brick Lane, near to where they make the bagels – and so I intend to meet up with her in the next few weeks to talk about thoughts and ideas for discovering more about the culture of the Andean peoples, and following up on some of the discoveries and places I travelled when I was there.  Which even included a story somewhat worthy of an adventure akin to an Indiana Jones movie – simply through tracing differences in the sounds of the music in different places.  So, literally, stay tuned folks – as I catch up with Sarka (pronounced “Shark -a”) – and show you how way can lead to way, and a great cafe!

A New Age travel writer, seeing the old in the new and the bold in the blue - but mainly seeking the freedom to be, as much as to do. His tales come from meeting modern day travellers following their likes of King Arthur to Geoffrey Chaucer, leading him on to places considered "Camelot" and different ways to see Canterbury and cafes a lot. Email: mattstale@yahoo.co.uk Twitter: @mattstale
View all posts by Matt's Tale →
This entry was posted in Uncategorized. Bookmark the permalink.

1 Response to Sometimes She Dances