Hooked on a chain

Once again I have been “caught by the chain”.  This time it’s Pret A Manger at Regent’s Square, near to the head offices of yet another large retailer who I have been contracting to as part of my day job. 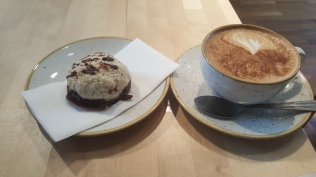 And, again, it’s one of the staff there who has helped make the place interesting and unique with her character – and a welcome break from managing or working around the politics and jockeying for position in a new department which is striving to break out of the old model into a new one which goes against the 250 year old tradition of sourcing from the best from elsewhere and selling it here. Well, at least it will be able to exploit whatever happens as a result of the “Remain” or “Leave” campaign with the referendum – because it will be one of the few British businesses (that I am aware of, anyway) which is geared up to go in either direction, of either bringing it all in – if all’s good demand- and price-wise here – or making and shipping it elsewhere, if it isn’t.

Yes, it’s big international corporations like this which can’t lose either way with the EU referendum, folks.  It’s only those of us who are limited in their ability to migrate to where the going is good who stand to lose if suddenly the doorway to Europe is closed and have to jump through hoops to be allowed in (or out?)

Indeed it’s perhaps timely and topical to have a post about a lady like this who stands to be one of the ones impacted if Great Britain “Brexits”, as there is a risk that her and others like her will have less choice of where and how they can go to provide that “magic” I believe they offer to what otherwise can be a rather a dull and boring culture that tends to be limited to discussion about football, weather and traffic flows – and not particularly interested in thinking beyond the day-to-day drudgery, and contributing something different, interesting and thoughtful to brighten up Britain.

The lady in question is called Edyta, and I believe she is reminiscent of the “new Britain” which has become fuller – and, in my mind, richer – due to the people like her who have come here since the country signed up to the European Union and opened its borders to economic migrants.

Edyta came here 3 years ago from Poland following her divorce – hoping to find herself here. She tells me her life is very different from that in Poland where she worked as a Sales Manager in a small chain of shops selling cigars. A humidory might be a good name for it, if there needed to be a name for it, as it is just as much about the boxes they come in as the cigars.

Like some of these elegant cigar boxes, Edyta is adorned with designs on her arms which each tell a story about parts of her life – from the name of her 16 year-old daughter, back in Poland, to the swallow symbolising freedom on one arm and the letters spelling K-A-R-M-A on the hand of her other arm telling of her belief in Fate. Then there is the warning of the muffin with a skull, representing the contradictions of sweet but bad or dangerous, which she says is like her.

Of course if I had not stopped to ask her about this, before I finished up my contract there, I would have known nothing about this – other than simply seeing her as being “the nice Eastern European lady who greets everyone with a ‘How are you today, darling'” and, if she recognises you, to quickly interject with an anticipation of your order so it can be made quickly.

So it’s hats off to Pret, despite being a chain, to employ people like this who provide something extra beyond a coffee and a cake to cater for us office jockeys bound by our own chains.  My worry is that if Britain breaks it ties with its European neighbours that we will lose these touches of diversity which make the place a brighter and more interesting place to be.

Then again, may be it’s only London likely to understand this – as Edyta told me that when she first came here she lived in a remote village in Cumbria.  She said she found it difficult there, because she was a stranger to them as there were no other Polish people and she tactfully tells me that people were “very different” to how they are in London.  Indeed, it was her friends who told her to come here to London.  I’m sure this, in itself, reflects the divide in the campaign – where those in London are likely to accept, and want, diversity provided by people like Edyta.  However those elsewhere perhaps see it as a threat and intrusion – and so not prepared to win “the magic” to their manors from making people like Edyta welcome.   Come 23rd June we will know who stays, and who goes, in the Big Brother Britain’s house

A New Age travel writer, seeing the old in the new and the bold in the blue - but mainly seeking the freedom to be, as much as to do. His tales come from meeting modern day travellers following their likes of King Arthur to Geoffrey Chaucer, leading him on to places considered "Camelot" and different ways to see Canterbury and cafes a lot. Email: mattstale@yahoo.co.uk Twitter: @mattstale
View all posts by Matt's Tale →
This entry was posted in Uncategorized. Bookmark the permalink.