The Syrian “sin” of The Coffee House

Spare a thought for Syria next time you are in a coffee house reading a newspaper, or simply talking freely with a friend in one, because the origins of the coffee house – now more commonly known as a café – come from there and they were meant to be places where people could meet and talk freely.

Certainly this was the irony for me one day, sitting in a café reading a newspaper article about the war in Syria, and hearing about the suppression of freedom of association and expression there.  Worse, even down to small children being harshly punished for expressing themselves, as a recreation of a picture by Banksy emotively captures. 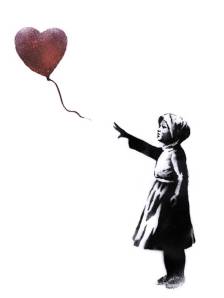 Coffee houses themselves were banned from the start for much the same reasons.  It was the Sultan who first sought to ban them when two Syrians brought them to Istanbul, in Turkey, in the mid tenth century – and similarly when they came to England in the seventeenth century (more than 600 years later), Charles II sought to ban them too. Why? Because they were places where people from all walks of life could meet and talk freely, and so the monarchs feared people would talk about them.

So now the country which gave birth to these places, which in themselves probably led to that right to freedom of association and speech enjoyed by democracies nowadays, seems to have found itself tongue-tied through a ruling régime which supports the exact opposite.

I remember travelling in Syria myself back in the early nineties, enjoying the sights, smells and sounds of Aleppo market, the Kerak crusader castle, the perfectly preserved amphitheatre of Basra and the quirkiness of the stuffed animals in the windows of the taxidermy shops. All this combined with the sequestered beauty of certain cafés tucked away in secret gardens hidden behind the walls of villas in Damascus.

But fear was expressed to me, by the few local people I met, about being watched by the secret police. I never saw anyone, but then maybe I didn’t know who or what to look for either.

Now, sadly, it is all too clear that they were there – probably blending in with the surroundings of those coffee houses, and in the midst and mist of a dictator’s fears of a populace talking about their concerns. And so was sadly created a country with a lack of freedom for the people to happily do and be who and what they really wanted to do and be.

I have recently asked Syrian friends in London about it. Apparently a strange world exists – perhaps much like George Orwell wrote about in “Animal Farm” – whereby you can only get by if you belong to a particular family or families.

In a way, this sounds to me like a hark back to the Middle and Dark Ages in England and other parts of Europe when monarchs of all sorts were dead set on ensuring their dynasties on similar lines – and the concept of “patronage” was key.  Except here we are in the twenty first century, and a dictator would prefer we would all go to sleep and ignore the coffee in order to keep himself and his family in power at any price.

Well, hard luck Assad, as Hell will hopefully not freeze over – as the rest of the world will find a way to help you wake up and smell more than just the coffee…

That smell will instead be the highly perfumed one of an Arabic Spring coming to allow coffee houses to open again in Syria and hopefully let the people in freely – regardless of the family they are from, their religion, race or any distinction – and along with the right to share their views freely, as long as it’s done fairly and respectfully without harming anyone.

Ironically it takes an artist who hides himself from view in Western world to say it so simply to all in one image about attempts to remove the rights to speak and associate freely with anyone and everyone – but now we too can say it all along with a simple hashtag: #WithSyria 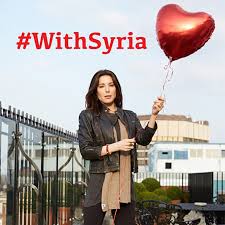 I fear what may have happened to those great coffee houses I went to in the market of Aleppo, as well as tucked away in the streets of Damascus.  One of the few, relatively open coffee house I went to was in Basra. Certainly I understand the market in Aleppo, once a World Heritage site, has now been burned to the ground.

A New Age travel writer, seeing the old in the new and the bold in the blue - but mainly seeking the freedom to be, as much as to do. His tales come from meeting modern day travellers following their likes of King Arthur to Geoffrey Chaucer, leading him on to places considered "Camelot" and different ways to see Canterbury and cafes a lot. Email: mattstale@yahoo.co.uk Twitter: @mattstale
View all posts by Matt's Tale →
This entry was posted in England, London, Syria and tagged coffee house, freedom of speech, Syria. Bookmark the permalink.