Further to my Right Royal Sheesha posting in January. The very next day after posting that story I was involved in a minor car accident where a car ran into the back of mine when we had to stop, relatively quickly, at a crossing which some school-children had decided to run across at the last minute.

As misfortune would have it, the car behind us was too close – with the driver not paying as much attention to the road as one ought to in such wet and cold days as we have had in this past winter in England – and that is what led him to run into the back of us. Fortunately neither my wife nor I were injured in the incident, and insurance from the other driver’s company (which ironically just happened to be a CCTV camera company) paid out.

My car, as a happy car – before the incident

The surprise was that the panelbeaters were located over at Park Royal, and so supposedly near to the unique sheesha café – as mentioned previously  – that I had yet to try out.

So as luck would have it – but not necessarily good luck (and so perhaps even needing me to say “Insh’Allah” – which translates to “God Wills It” – in the hope it will be good luck) –  it seems I was destined to head over to Park Royal at least.

It was just a question of whether or not to go to the sheesha café as, to be truthful, I had found myself a little hesitant to head all the way over to this place – as while there was something about its remoteness that intrigued me, I was slightly worried about smoking sheesha too, as I know little about it and its effects. It made me feel as if I was going to be heading into a foreign country where dyed-in-the-wool Westerners like me might not be welcome.

That was why I had tried to enlist my friend, Ismail, to come with me – as he seemed to know more about it than me, and he is originally from the Middle-East where smoking sheesha is a custom.

Indeed, it was from Ismail that I learned that the whole sheesha smoking experience is apparently something that is a relaxed early-to-late evening thing to do –  and is something that one will do with their friends and colleagues after the day is done, where you can all sit down, relax and talk about the day (or anything for that matter).  So it seems to me that sheesha just helps provide something to do to help everyone with relaxing, and feel comfortable chatting, while sitting together – and perhaps even the sheesha itself provides a talking point.

Unfortunately Ismail’s wife was very close to having their first baby, and so any such  excursion in an evening at that time was out of the question for him.

Nevertheless – or maybe “Malesh” (“Never Mind“), as they say in Jordan and other parts of the Middle East (and as I had learned from travels in Syria and Jordan many years ago – which is a whole other story) – the complications with my car seemed somehow to be leading me over that way.  So perhaps God was willing me to confront my fears?!

So finally, in mid-February – several weeks after the incident, when my car was repaired and due to be collected in the early afternoon from the panelbeaters in Park Royal – I thought that it ought to be fairly safe to head over then and at least see what this café looked like for myself.  Especially as my journey took me over that way.

Thus convinced by myself, it was around 4pm in the afternoon that I picked up my newly repaired car and made my way over there. 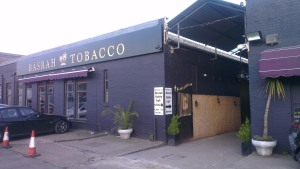 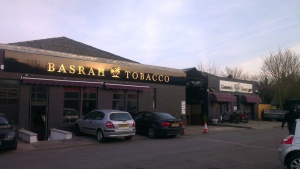 The name of the café is Basrah Lounge. It is tucked away down at the end of a road to nowhere, on a side road just off the A40 heading out of London. Every other edifice leading up to it is tied in with selling cars or involved with various forms of light industry.

You would not expect anything other than a quick snack or lunch bar at most to be there.

An entrance in between what looks like a warehouse and a fast food takeaway outlet, complete with delivery bikes, is the way into where the lounge is found. Some plants at the entrance help to take away the industrial feel and suggest some form of invite into a more inviting environment 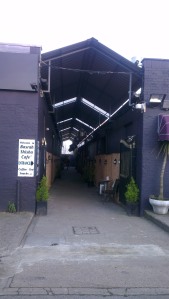 Unfortunately, while taking these few photos of the outside, a manager came out from the entrance at the right-hand side and confronted me on why I was taking them.

After telling him the story of how I had come to hear about it, he directed me to the way in between the two buildings – but he gave me the impression that I should not take any more, just to be sure.

So, my friends, I cannot share any more photos of the actual lounge itself – aside from saying that it is more like a Middle Eastern oasis of comfy couches inside, as they are all arranged in squares around where the sheesha pipe and bottles can be placed conveniently for sharing. It provided a surprising sight to see – and quite a contrast from the industrial world outside.  Television was available on some walls, but not in an intrusive way. What’s more, I was told that the seats are heated – and so everything has been done to make sure that the customer’s comfort is a premium consideration (including when the weather is cold).

The one thing I noted though, when I walked in, was that there was no one on their own like me – just a couple and a few small groups of people chatting away in their areas sharing their sheesha. The other thing that struck me was the menu, which had a broad variety of sheesha tobacco flavours on it.  It also listed a few drinks too.

It was the latter that led me to think that I could at least take in the atmosphere, as I had no idea which sheesha would be good. Indeed, I did not even know how I ought to smoke it.  Clearly this was not a place for sheesha virgins, like me, to visit.

This observation struck me even more between the eyes when the waiter came over.

“No”, he replied, “This is a sheesha café – and we only serve people who come in here to smoke sheesha”

“Oh!”, I replied – surprised, “well can you give me a few moments to have a think about it?”

“I’ll just go and check with the manager”, he replied.  So he went up to the front of the lounge and disappeared through a door.  At this point, I contemplated the menu to see if there was anything I might be able to handle on my own.  There were a wide variety of flavours – and “Apple and Cinnamon” stood out as one I’d probably be prepared to try.

I then looked at the price: was that £15?  Ouch, sheesha is not something to take lightly!!  A lot steeper than the price of a coffee, irrespective of whether you are a fan of the double macchiato with a twist (i.e. two shots of coffee with a spot of milk in a miniscule-sized cup – for much the same price as a big mug of latte). This indulgence was more like the price that a Westerner like me might expect to pay for a whiskey liqueur coffee – and then some….

Then the waiter came back.

“Everything is OK if you want to stay”, he said -and I saw the man who had indicated the way in to me standing at the entrance to the door that the waiter had gone through. Clearly he was the manager, and he smiled at me and gave a wave in the air where you turn your hand back to front – and I gave one back.  I had seen the same type of wave on my travels in the Middle East, and I knew it to be one used when a man recognises a friend that he wants to offer something to.

However I realised that I was not ready to take in this experience on my own.  So I thanked the waiter, telling him how great it had been to come in and see the place, and that I realised it is “really one to come and experience with your friends rather than be on your own.”

I also asked him to thank his manager for allowing me to come in, and in doing so I gave a open-handed wave to the manager again – in a gesture of farewell, and which I trusted to be one of gratitude too. The manager waved back in the same way, and at that point I stood up and walked resolutely out.

I will head over to revisit Basrah Lounge again however, and hope to make it my first place to try sheesha – but just do it with friends who I know and can appreciate the experience, as well as the uniqueness of Basrah Lounge, as it would seem a shame to waste what is clearly special and expensive tobacco on people who do not know the best way to take it. After all, it’s clearly much the same as for those who truly appreciate coffee both roasted and made well – or tea, for that matter.

Certainly the lounge is named well – as Basra is the name of one of the more unique places I visited in Syria back in 1993.  That city was the only one where I have been able to wander around an almost perfectly preserved Roman amphitheatre. But that adventure, my friends, is a completely different story – and one I may tell one day, assuming you like to hear stories about retracing the steps taken in bringing silk to the Middle-East and Europe (and everything and everyone that came down along the roads with that)

A New Age travel writer, seeing the old in the new and the bold in the blue - but mainly seeking the freedom to be, as much as to do. His tales come from meeting modern day travellers following their likes of King Arthur to Geoffrey Chaucer, leading him on to places considered "Camelot" and different ways to see Canterbury and cafes a lot. Email: mattstale@yahoo.co.uk Twitter: @mattstale
View all posts by Matt's Tale →
This entry was posted in England, London, Park Royal, Syria and tagged Middle East, sheesha, sheesha cafe. Bookmark the permalink.