So the coffee wasn’t cooking, as I progressed my way South towards Tintagel back in 1991 – however the scones were!

That, coupled with a pot of hot tea with nice fresh farm milk, makes what is called “a cream tea”. It more than made up for the coffee I’d missed from back in Australia, but largely thanks to the combo – because, for me, tea is not a drink drunk alone and without an accompanying side dish or snack.

In the start of that year of cream teas, somewhere in between Salisbury in Somerset and Tintagel in Devon, I began to discover a small realm of places with the best of them – from tea rooms serving small stodgy scones that needed more jam than cream to the large yellow ones, made with pumpkin flour, that were the crowning glory of all scones in sheer size and soft texture.

Yes, I became something of a connoisseur of all that was great, tasty and good in a cream tea. I might as well have been crowned king of the cake that is not a cake, and is not a biscuit either , as it is a scone (geddit) – but I could not have it without its crowning accompaniments. No, sirreee!

Admittedly it was thanks to my beautiful friend, Arna Marshall, that put me on to the wonders of it. She was an ample (as in buxom) lass from Taunton in Somerset who I had met back in Australia, in the year before arriving in the UK, when she was on a working holiday there and I was on my first year breaking away from my home in New Zealand.

We had shared a love of cricket, with our highlight seeing The Third Ashes Test at the Sydney Cricket Ground on the first day after New Year’s Day, 1991, and taking walks in the countryside around Sydney (such as The Blue Mountains and Ku-ring-gai Chase National Parks).  It was meeting people like her that had both made my year in Sydney worthwhile, as well as gave me the incentive to make that first leap across the other side of the planet to see England through having someone to know and visit.

Arna had stayed with me briefly before returning home to England and, in return for “surfing the couch”, had agreed to show me some of the sights around her neck of the woods when I got over there. This included introducing me to cream teas and the delights of the English tea room, often situated in the centre of some quaint village somewhere.

Somewhere along the way of the day or so we spent together, travelling from Taunton in Somerset and on down to Tintagel and back, we had this idea of deciding which tea room served the best cream tea.

The winner had to be this little place in Dunster, just down the hill from the famous castle with the most beautiful gardens I had ever seen up to that point. 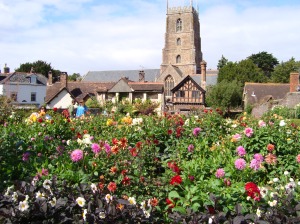 Gardens at Dunster - but not ones at The Castle

The scones were just the right side of warm, and the jam not too runny – but the winner was the large white pot of fresh clotted cream that sat when served, without melting on the scone along with the jam in a way that literally was like a serving fit for a king. The tea too did not disappoint, made from fresh leaves – steeped in the pot for no more than five minutes – and then poured through a strainer, to remove the leaves, into a nice bone china cup with just a few splashes of milk to make for a reddy brown brew.

OK, so taking out the leaves meant there was nothing to tell our fortune with at the end of it (as I vaguely recall Arna professed she or an aunt of hers could do) – but then nothing likely to be embarrassingly caught in our teeth upon drinking it too.

Perhaps the best thing about it though, was that it was definitely a good tea for two – where, for some strange reason, anything and everything seemed possible. I can still remember it, twenty years on, and also I wonder: what happened to Arna?

A New Age travel writer, seeing the old in the new and the bold in the blue - but mainly seeking the freedom to be, as much as to do. His tales come from meeting modern day travellers following their likes of King Arthur to Geoffrey Chaucer, leading him on to places considered "Camelot" and different ways to see Canterbury and cafes a lot. Email: mattstale@yahoo.co.uk Twitter: @mattstale
View all posts by Matt's Tale →
This entry was posted in Australia, England and tagged buxom lass, cream teas, raspberry jam, second ashes test 1990, strawberry jam, sydney cricket ground. Bookmark the permalink.